Prefabrication in the West ultimately begins in the 16th and 17th centuries, with Great Britain's colonization of what is now India, the Middle East, Africa, Australia, New Zealand, Canada and the United States.  Building components were manufactured in England and shipped to various colonies worldwide, where it was not known exactly what/how much raw materials would be available to new settlers upon their arrival in unfamiliar territory.

The earliest of these prefabricated houses were sent to the fishing village of Cape Anne (Massachusetts) in 1624. During the period of Australian settlement in the late 1700s, prefabricated hospitals, storehouses and cottages were shipped to Sydney - all of these were simple timber-framed structures with timber panel roofs, floors and walls.  During colonization of South Africa in 1820, shed-like wooden cottages were sent with relief missions of settlers.  They consisted of pre-cut timber frames, with board-battered siding trimmed on-site, and completed window and door components[3].

The Manning Portable Colonial Cottage was the next stage in this evolution of the prefabricated home, developed by London carpenter and builder, H. John Manning.  This design was an improvement on earlier frame and infill designs because it offered ease of construction.  He set out to create a confortable, easily constructed cottage for his son who was immigrating to Australia in 1830.  This prototype became the first documented completely prefabricated house.  It was a timber and panel infill prefabricated system made up of grooved posts, floor plates and triangulated trusses which became the pitched roof.  The system was standardized and interchangeable, with panels that fit between grooved posts.  These posts would be bolted into a continuous floor plate on bearers.  The posts carried a wall plate with supported triangulated trusses, with wood panel cladding.  The cottage was designed to be mobile and easily shipped.  Manning explained, "As none of the pieces are heavier than a man or boy could easily carry for several miles, it might be taken even to a distance without the aid of any beast of burthen"[4]. The lack of transportation infrastructure in new colonies makes this point particularly important.  The entire building could go together with a standard wrench, without any joints, cutting, or even nails, which was feasible for unskilled emigrants with limited tools available. 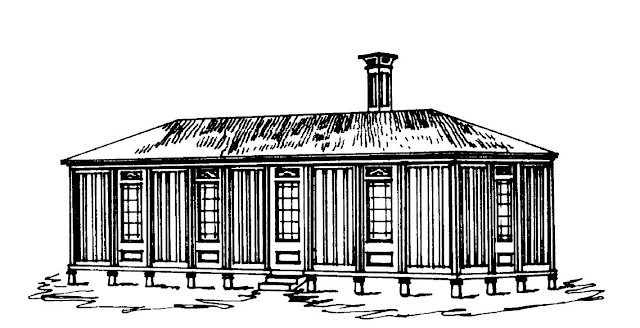 The cottage was a commercial success, and Manning ended up developing several models of different sizes and cost.  The Manning Portable Colonial Cottage immediately became a solution for the rapidly expanding British colonies throughout the 19th century.