The Nissen Hut was designed on a six foot nine inch grid with a T-section iron frame. It was a semicircular arch created from four different components: a curved metal roof, floor panel, and enclosing walls at each end. There were no dug in foundations or footings and were built on two longitudinal sleeper joists and designed to touch the ground lightly. All connectors were fabricated by a hook and bolt system, which allowed for the assembly to be done with just a wrench. It was able to be loaded onto a single truck and all the parts transferred by two men. The erection of this building took less than four hours and had the space to hold 52 people and accommodate sleeping space for 24.


The T-rib Quonset Hut was modeled closely after the Nissen Hut. It had an arch of sixteen feet and identical steel arch frames. The main differences were that the insides of the T-rib Quonset Hut was lined with Masonite and the exterior was covered with corrugated metal panels, lapped and mounted to wooden purlins with a core layer of paper insulation. The Nissen Hut’s corrugated metal was more intricate inside and out, and relied solely on the air cavity in between the two for insulation. This structure was able to be assembled by six men in less than a day. 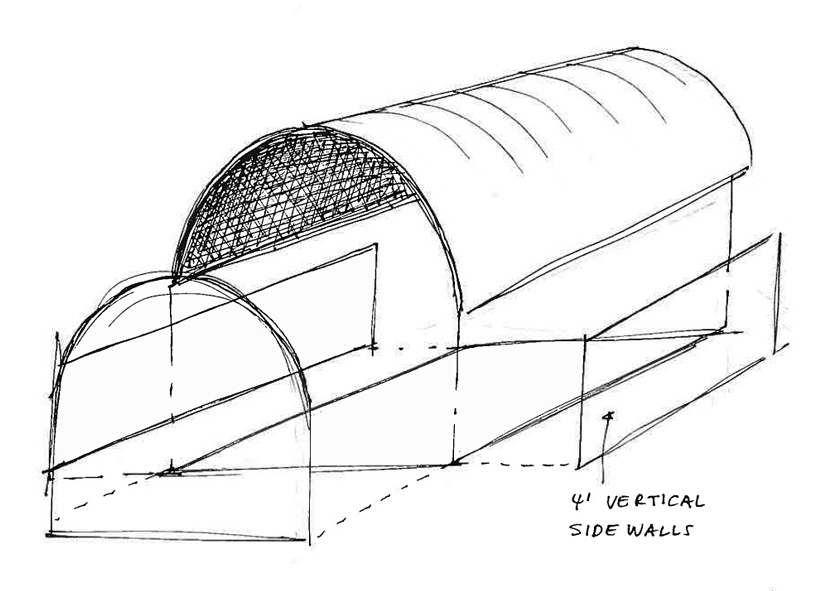 The original Quonset Huts had arches that spanned all the way to the floor, and this meant that there was a lot of wasted space: furniture had to be moved inward until it hit the curve. The redesign meant that walls were to be erected to support the arch so that they were able to claim the space lost where the arch met the floor. Brandenberger’s team proposed a modified arch which consisted of four foot high vertical walls supporting the arch. The structure of the arch itself was changed as well: it was changed from three sections to two sections, which reduced the time of construction and the number of fasteners. The T-section was replaced with a lighter weight I-section developed by the Stran Steel Company. This new Quonset Hut was 60% less expensive than its predecessors and 35% lighter to ship. 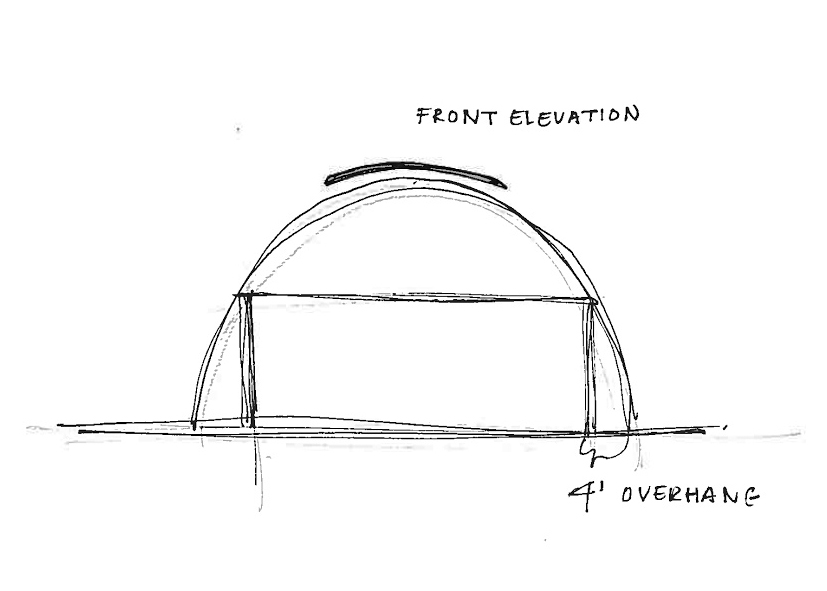 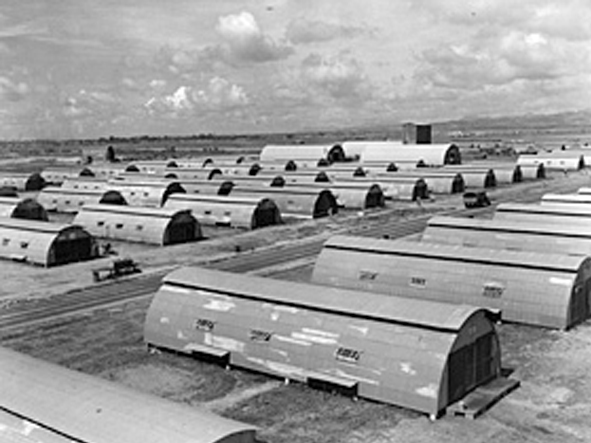 The Stran-Steel Quonset Hut was created in 1941 and was the last major redesign of the original Quonset Huts. Its footprint was increased to 20 feet by 48 feet and it reverted back to the full arch ribs. This final redesign required less shipping space and weighed less than any of its predecessors. The floor was changed from its one inch floor system to a half inch plywood system and lighter gauge galvanized siding was introduced. The siding layout was modified with the factory-curved panel only used along the ridgeline. The remainder of the hut was sided horizontally, allowing the panels to be shipped flat. The entire hut actually came to be 56 feet long by the end because of a four foot overhang at each end of the structure.


The company created arched steel I-ribs that were assembled from two pieces of deformed steel rib channels that were tack-welded back-to-back creating a curvilinear nail groove that would accept conventional fasteners for both the outer and interior cladding. The Quonset Hut could then be cladded with less effort by pounding a nail into the I-rib[2].

For easier transport of the , the Stran-Steel company decreased the weight of the parts. The company had already been a master in the field of lightweight, prefabricated structures and changed the cladding into gauged corrugated galvanized steel sheets. In addition, the Stran-Steel Company’s design re-introduced the semicircular form the arch, despite the issue of wasted space where the arch met the floor, since it was the lightest form. In the end, the Quonset hut weighed less than three and a half tons and took less shipping space than tents with wooden floors and frames, while having the room to accommodate more men[3]. 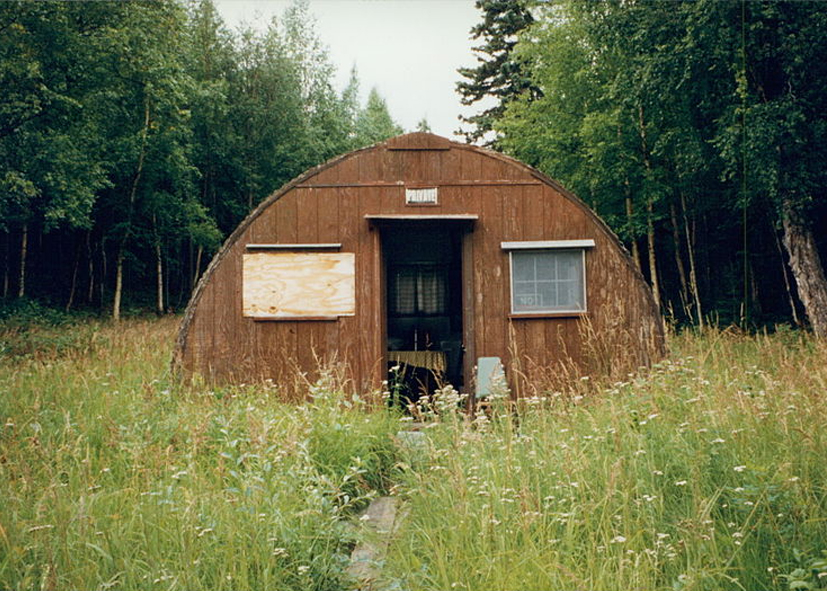 The 18'–6" x 37'–4" Pacific Hut was an all-wood Quonset hut, designed by the mechanical engineer, Frank Hobbs.  The U.S. Army Corps of Engineers picked up this design in summer of 1942 as it served to be the solution to overcoming the dwindling steel supply during the war effort.  Steel also rusted quickly in the tropics and wood structures greatly reduced thermal transfer in the Arctic. Other features of the Pacific huts are celotex (waterproof masonite) exteriors, and the triangular ridge-line vent cover. 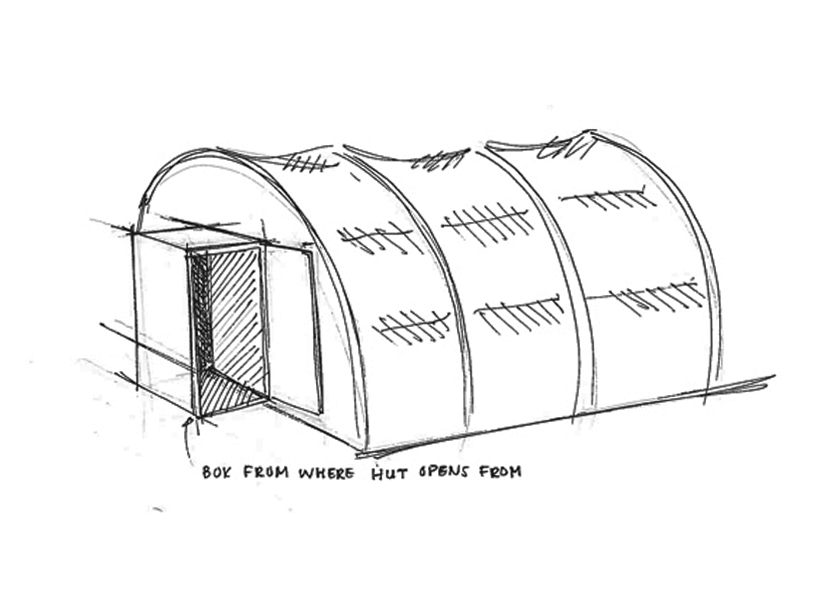 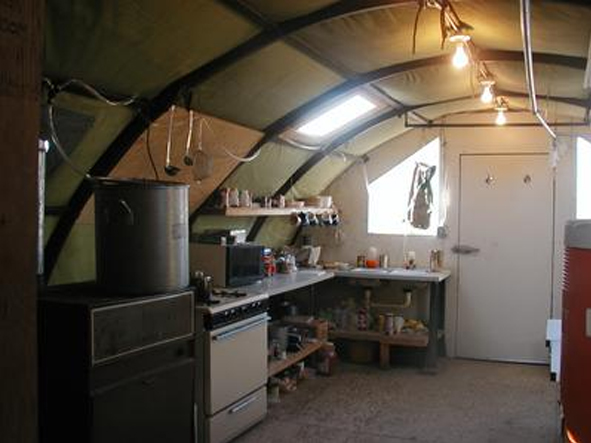 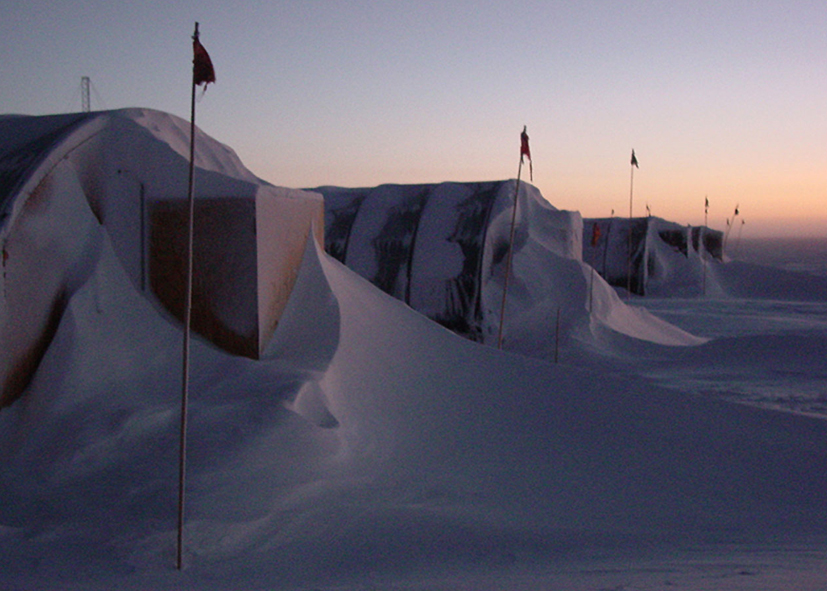 The Jamesway Hut consisted of wooden ribs and an insulated fabric covering. It was easy to assemble and was created for arctic warfare, so that people were able to assemble the hut even with gloves on. It was 16 feet by 16 feet and weighed 1200 pounds, with the box it came in designed to be used as a wooden floor. The insulated fabric covering was made of four foot wide glass fiber insulation with frame-proof muslin enclosed in plastic that was water, vermin, and fire resistant. The only components of this hut that were metal was the fasteners, nails and connectors. 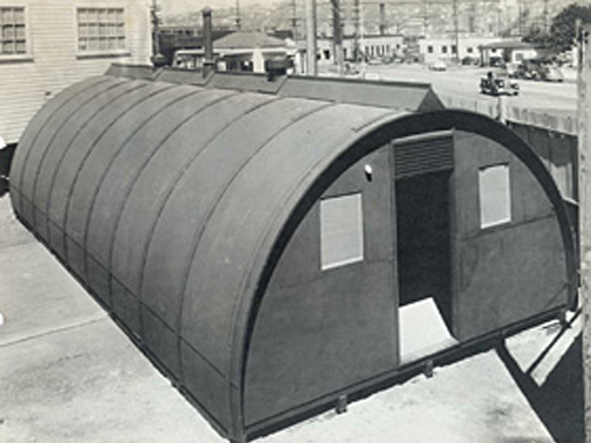 The Portaseal Hut is most frequently seen throughout Alaskan highways. It is a Canadian version of the wood framed plywood clad structure. It had a tar paper finish nailed on top of plywood sidewalls, on top of end walls with large windows and wide batten type trim boards on top of end walls’ vertical panel joints. 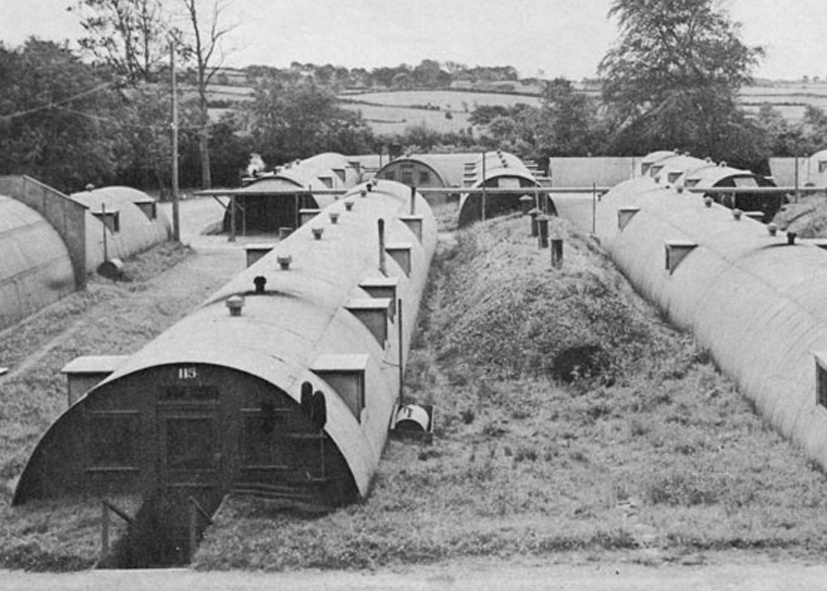 ‘The Elephant Hut’ was an enlarged version of the Quonset Hut, with dimensions of 40’ x 100’. A construction team of ten men could build one shed in under 300 hours, an impressively small amount of manpower and time considering the building’s size. It could also be shipped to any location in 23 crates and took up little room in a ship’s cargo hold. 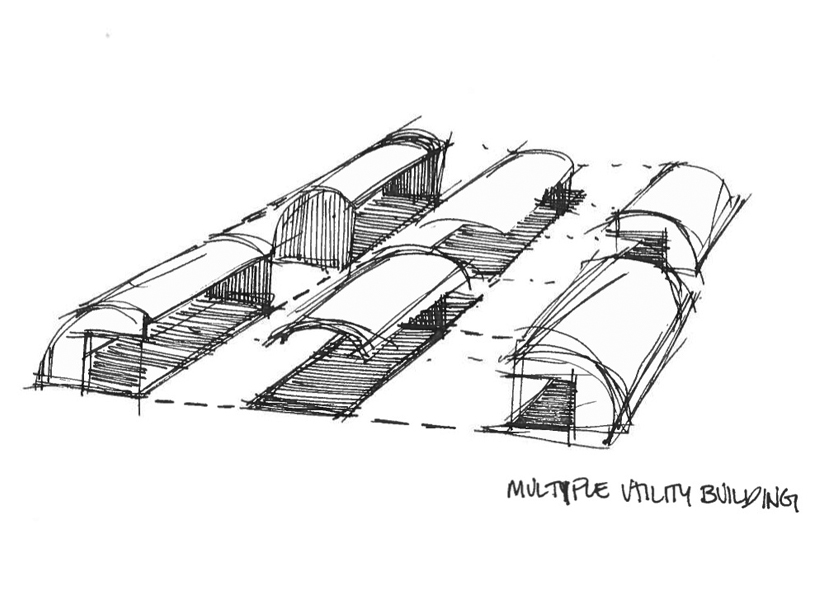 F              The multiple utility building was slightly larger than the utility building and expandable in both width and length. The basic building was 80’ x 102’; additional units were 61’6’’ x 100’. The arched roof segments were connected to each other in such a way that low sloping valley gutters were created, allowing for easy management of rain and snow. The largest building ever built was said to be a 54 000 square foot warehouse and was located in Guam. 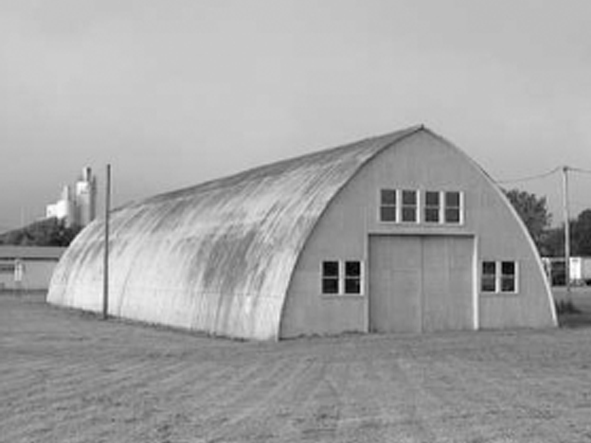 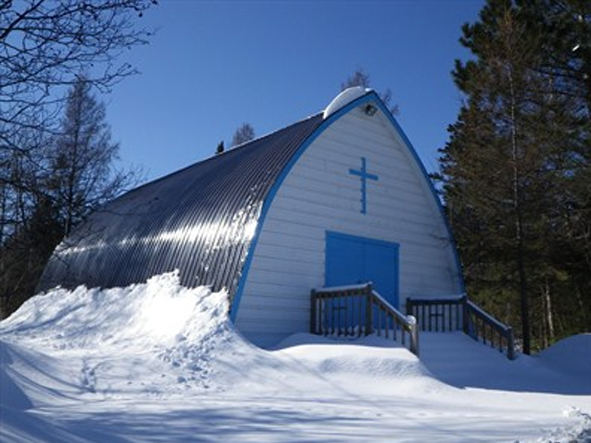 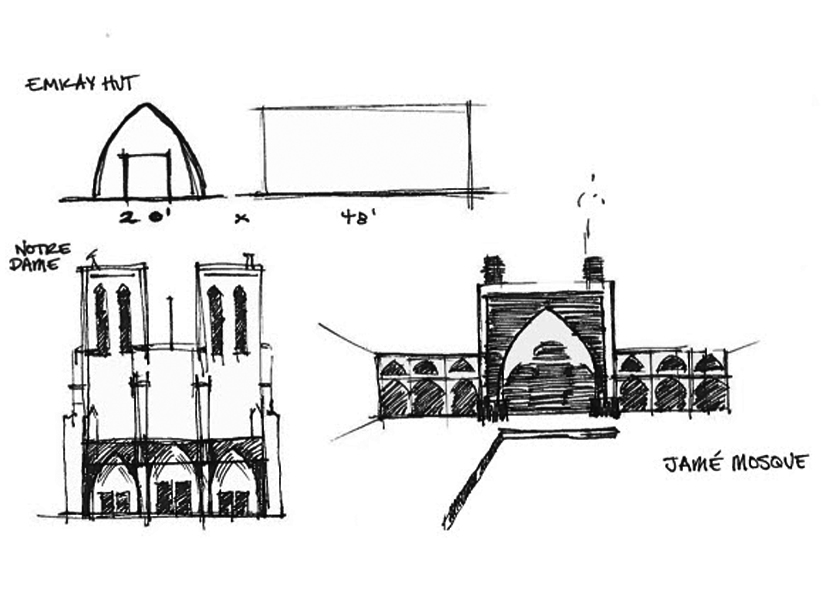 The Emkay Hut was designed by Morrison-Knudsen engineer G.D. Paxson as a multi-use building for company workers to use. The company was heavily involved in large scale and lengthy military construction projects and required housing/offices/messes for their teams of men. The design of the Emkay was slightly different than that of the Quonset Hut. It was not a perfect semi-circle but instead had a profile reminiscent of Gothic Cathedrals and Islamic architecture.  Like the Quonset Hut it could easily be extended, additional sections were 20’ x 12’. 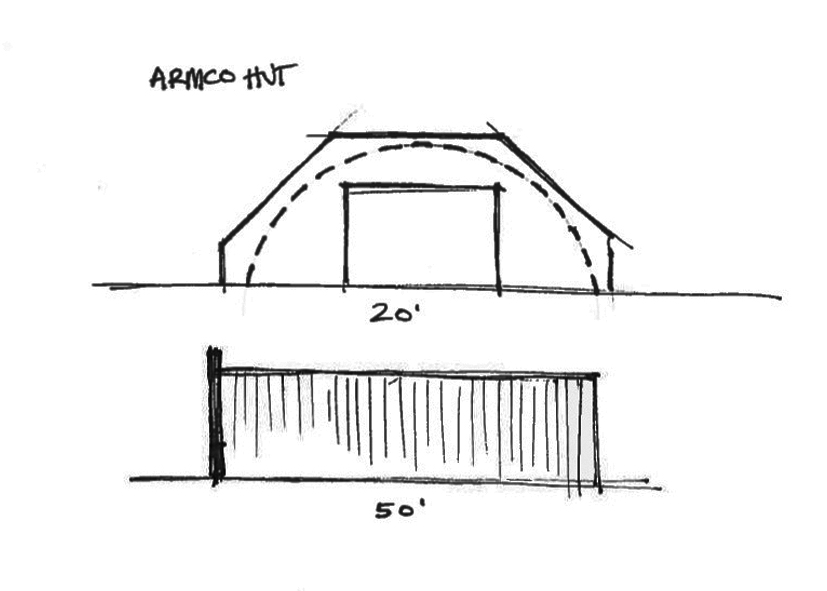 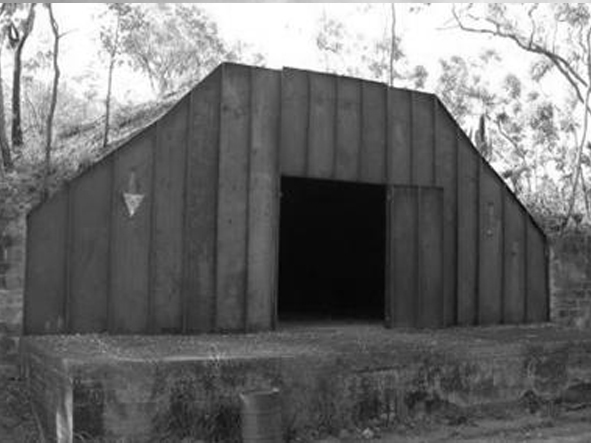 These huts were built by the Armco International Corporation and were used as bunkers, ammunition stores etc. because of their sturdy construction. Armco looked to sewers and earth retainers for inspiration when designing their hut. They were constructed with heavy steel that allowed them to be buried in up six feet of dirt. 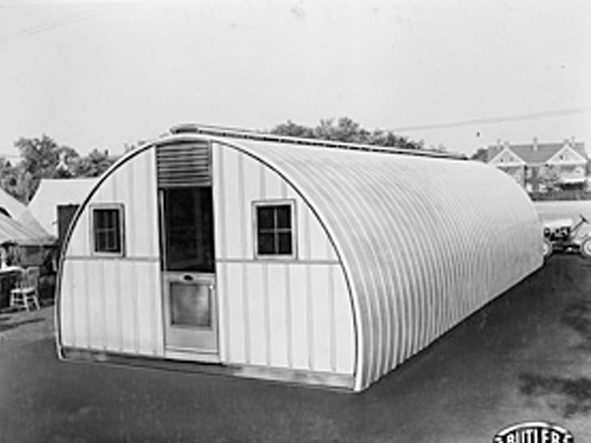 Built by the Butler Manufacturing Company, it was the smallest of the ‘huts’ at only 16’ x 48’. However, it was produced in larger basic units. It was completely constructed out of steel; the end walls were framed steel and the 2’ sections that made up the curved walls                       were seamed sheet metal. 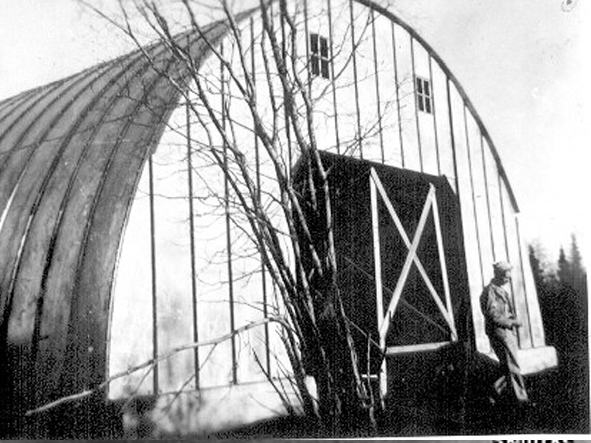 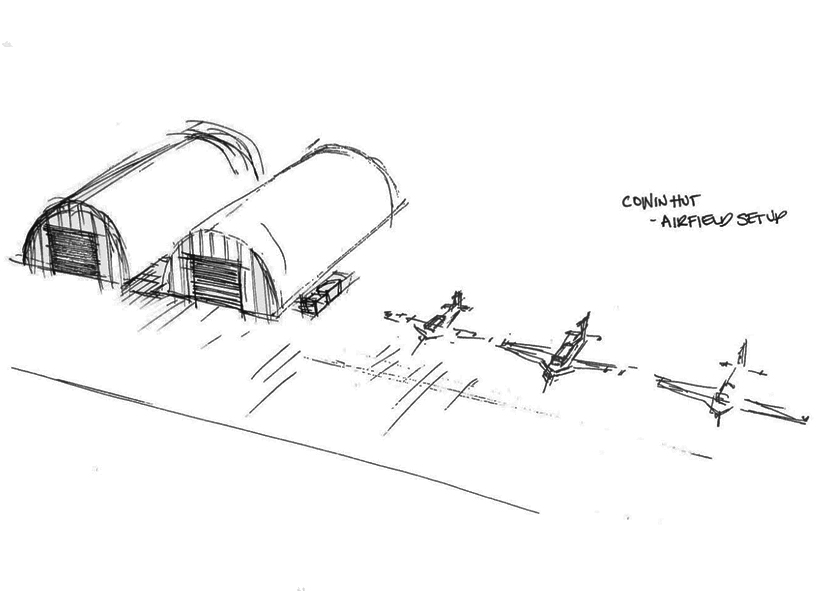 Also known as the ‘steeldromes’, they were designed and built by Cowin and Company Inc specifically for use by the Air Force. Their basic size was 36’ x 60’ and of course, they could be extended. The Cowin Hut was supposed to used in any climate but it soon became apparent that they would not be able to handle snow after a few collapsed during the 1943 winter in Alaska.