Quonset Huts after the War

As early as 1943, the Stran-Steel Company began positing potential roles of Quonset Hut after the war. Advertisements during the wartime portrayed a post war society of modern, and Quonset-like, architecture[1].

During the war, Quonset Huts were modified for domestic and spiritual purposes. In 1944, a Seabee by the name of Bruce Goff was asked to renovate a Quonset Hut into a chapel at Camp Parks (near San Francisco). The Camp Parks Chapel was made by connecting two “elephant” Quonset Huts with a masonry wall that intersected main vaulted spaces[2].

When the war ended, it brought about a housing shortage in the US, as 12 million men turned from the battlefield towards private life. In addition, wartime marriage, rural to urban migrations, and a population boom of 8 million people in 5 years also contributed to the problem[3]. Even if 1.2 million permanent homes were to be built every year in the U.S, it would still be 10 years before everyone was housed[4]. Housing was so scarce that veterans and their family were forced into unconventional homes, such as a renovated barrel-shpaed burger stand, a beer-van-turned-apartment, and even a renovated mortuary[6].


Quonset Huts were sold by the Stran-Steel company for $873. The buyer would receive the kit and framing of a 20’ x 40’ hut that would provide shelter for 30 barracks during the war, but was converted into three apartments; 2 bedrooms, a kitchen, a living room, and a bath. However, the buyer had to erect and insulate the hut himself[5].

A shortage of student housing was also a problem on college campuses across the United States. Quonset Huts were used as temporary classrooms and student housing, to help house the dramatic increase in veteran enrolment after the G.I. Bill was introduced [7].  At the Colorado State University (CSU), half and full Quonset Huts were erected at the Veterans Village on campus to accommodate the increasing number of veteran students.

The Mass Production of Kit Homes in America 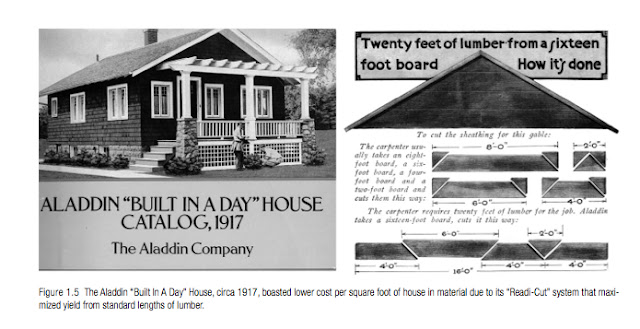 During the industrial revolution at the turn of the 20th century, ordering kit houses constructed with light-frame balloon framing and pre-cut timber became common.  The East and West Coasts of the US had been connected through the Transcontinental Railroad in 1869, and the American population was rapidly expanding into the West, where there were very few established settlements.  There was an urgent need for prefabricated, affordable, and easily constructed housing. One of the first mail-order kit home systems was Aladdin Homes, founded in 1906  by two brothers, W.J. and O.E. Sovereign.  The brothers formed their system by adapting previously established mail-order systems used to purchase boats, which buyers purchased to assemble themselves.  They used the popularized mass production concepts of the time, and applied these systems to create mass housing, and they marketed a "Readi-Cut" system[1].  In this system, all the lumber necessary to create a specified house was pre-cut in a factory and delivered to the housing site, and all the customer needed were basic tools to put the house together.  This process was designed to streamline the construction process by decreasing the time needed to erect the house, and by removing the wasted materials caused by miscalculations onsite.


Chicago-based Sears Roebuck and Company followed the first mail-order mass housing systems, like that of Aladdin Homes, and was able to sustain pre-fab housing efforts due to an increased use of marketing.  Sears Roebuck and Co.'s main success was the fact that they could offer a wide variety of housing and financing.  Over their 32 years in business, a large team of designers and architects produced 445 different models, which ranged from one room structures to multifamily units[2].  From 1908 to 1940 Sears Roebuck and Co. was the world's leader in prefabricated residential design and manufacturing.

Sears, Aladdin, and other kit home manufacturers never claimed to change architectural design, but rather provide a more efficient system of production and construction, while offering a standardized and affordable product to the consumer.  Ultimately, both Sears and Aladdin failed during the housing crisis of the Great Depression and they pulled their catalogs.

In the 1930’s the American government passed a series of acts that would prevent the U.S. participating in the war that was clearly on the horizon in both Europe and the Pacific. However, when the Japanese attacked Pearl Harbor on December 7th, 1941, the gears were set in motion of the most efficient war/production/manufacturing machine on the planet at the time. During World War II no other country out manufactured the Americans. Their gross domestic product jumped from 800 billion to 1.4 trillion between 1938 and 1945. They also built more jeeps, heavy trucks, merchant ships, aircraft carriers, battleships, bombers and fighter planes than any country participating in the war. Although the Soviets made more tanks and ammunition, no one came close to matching the American production level.

How did they do it? Well laid out factories for easy mass production and the mastering of the prefab building technique. An example of their incredibly quick production time is the fleet of Liberty Ships that were built during the war. In 1936 the Merchant Marine Act was passed to rebuild America’s decrepit and dwindling merchant fleet. The Liberty Ship was to become the basic model for the fleet. In total from 1937-1945, 5500 were built with more than half that number built during the war. At it’s most productive period, the ship yards were turning out a liberty ship every forty-two days, with only a twenty-four day period from dry dock to being tied up at a dock. They managed to build them so quickly by prefabricating large sections of the ship. A liberty ship consisted of four large pieces: the bow, midship, stern and deck (including the wheelhouse, etc.).

The prefabrication model also applied to other items produced for the war effort. In Dearborn, Michigan, at the Ford plant, planes were being turned out at about the rate of one per hour. At the height of production, the assembly line extended a mile through the former car factory complex. Bombers, like the Liberty Ships, were built in smaller pieces (fuselage, wings, etc.) and then assembled at once into the large aircraft. Because of this efficiency in building technique they were able to produce over 90 000 planes between 1941-1945.

The factories that built all the machinery of the war were originally car, metal fabrication and even canning plants. The Americans easily converted them into war production machines after the attack on Pearl Harbor. This ‘multi-use’ ability of virtually everything that the Americans made or owned was one of the biggest reasons that they won the war. A Liberty Ship could be used to transport anything from troops to canned beans. Their jeeps and trucks were so versatile and easy to produce that they sold them to their Allies. They virtually kept the British alive during the Battle of Britain and throughout the subsequent years of the war.

It is not surprising then that the Quonset Hut was the standard issue building of the Navy. It preformed so well that it was used by other sections of the armed forces and even other countries. Like the ships and planes of WWII it was assembled in parts, speeding up the building process. It fit perfectly with the American sensibility of the time, being recycled, cheap, prefabricated, mass produced, easy to assemble and effective. 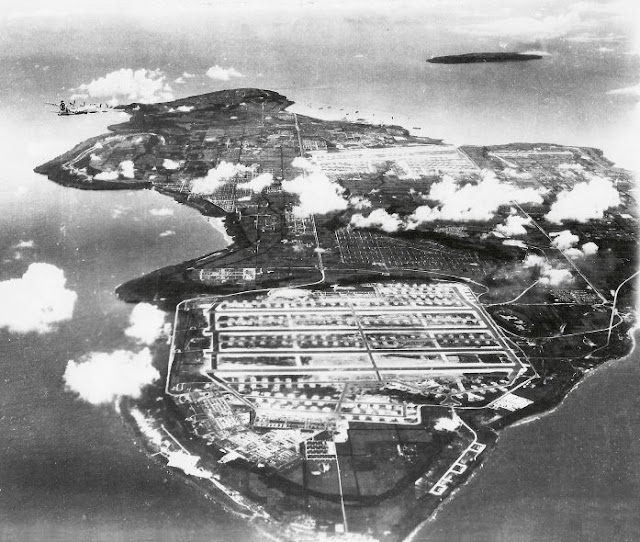 Tinian is a small group of islands in the Philipine Sea. The largest island saw the Seabee's greatest accomplishment and biggest construction project of the war. It’s close proximity to the Japanese mainland made it an important strategic strip of land during World War Two. For nine months in 1945 Tinian saw the most air traffic than any other airport in the world. Before it was in American hands, the Japanese used it as an airbase as well. In 1944 the American’s seized the island in the Battle of Tinian. There were large casualties on both sides with the Japanese sustaining the largest number; over eight thousand. It was a must win for both sides, the Americans would gain control of an important piece of land and if the Japanese lost they would give the Americans access to bombing the Japanese mainland.

Upon taking control of the island,  the Seabees of the 135th United States Naval Construction Battalion set about converting the available land to accomodate the 58th Bombardment Wing along with it's 40 000 support personnel and 50 000 marines. The Japanese had originally constructed two parallel runways on the west side of the island. The Seabees added two additional runways and the airfield became known as West Field. To the north, four more runways were constructed to house and launch the new long range B-29 bomber, which would be bombing the mainland. These four runways were 2600 meters, and incredibly they were constructed in less than a year. The runways themselves were built out of crushed coral, a readily available resource.

The Quonset Hut was used extensively on the island. They were a perfect building for the Seabees, as they were easy to transport and to construct. The Quonset Huts were grouped together into mini-cities of barracks, armories, airplane maintenance sheds, messes, chapels and hospitals. The Seabees copied the street organization of Manhattan Island and named the roads on the island after New York City streets. Land was also converted for farming to feed the tens of thousands of men and women that would be living on the island. The island became a self-sufficient community. On top of the need to have a high efficiency base layout, the Seabees had to accommodate nearly one thousand B-29s. Taxiways and hardstands were laid out effectively; so effectively in fact that more missions were flown out of Tinian than any other airfield during the war.

‘The Use of Tinian Island During World War Two’. Accessed December 7, 2012. http://web.mst.edu/~rogersda/umrcourses/ge342/Tinian%20Island.pdf